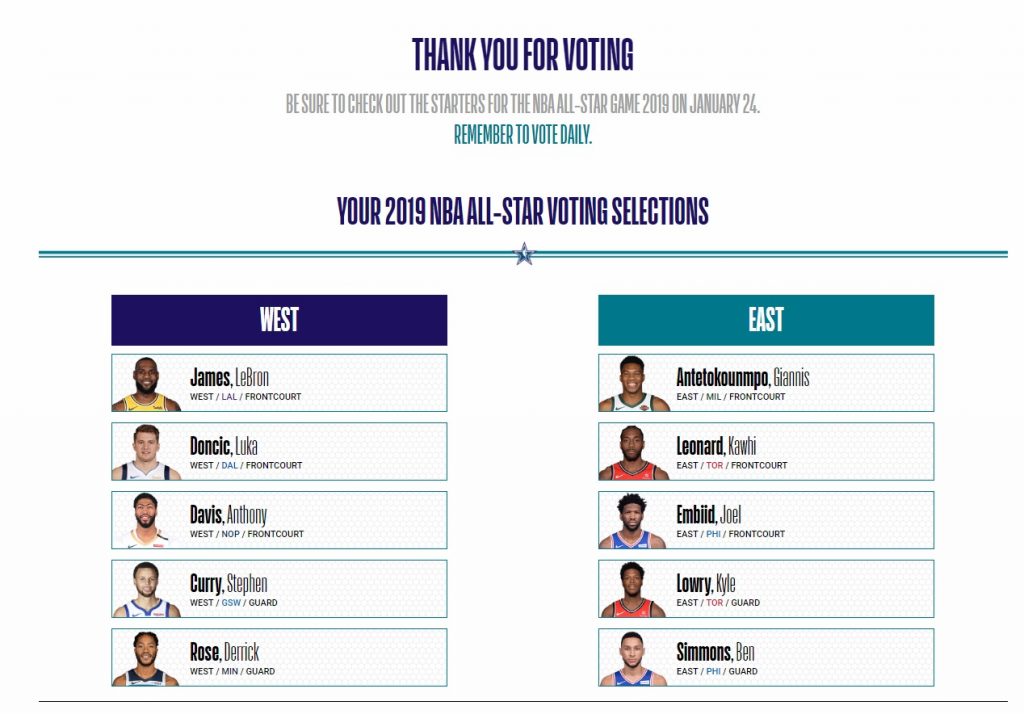 The 2019 NBA All-Star Game will be held on Sunday, February 17, 2019 in Charlotte, North Carolina and it’s open for fans to vote for their favourite starting 5 for both Eastern and Western Conferences. There are many ways to cast your vote, either via mobile, internet, or going to the NBA.com site. I just like to do it via the NBA.com site, I love checking out the player’s profiles and their photos.

And here are my MoVernie Picks and I have included a brief reason for my choices. In the voting ballot, we are asked to pick 3 front courts and 2 guards.

Although I still doesn’t know how to spell his last name (just too long and not easily remember), the “Greek Freak” well-deserves to be on the starting all-star roster. And if the MVP vote has to be held today, I would choose Giannis to be the clear cut MVP winner as well. This guy has been consistent so far in the half-way mark of the regular season. Leading his team to a neck-and-neck battle for 1st place overall with the Toronto Raptors in the Eastern Conference. Greek Freak is solid in points per game; assists and rebounds. He is everything.

Kawhi has a healthy season so far and he is playing at a level where he is capable of playing in both the offensive and defensive ends. He is making the Toronto Raptors a winner and the team is at the top of the Eastern Conference right now and they got exactly what they expect from Kawhi Leonard so far. And of course, Raptors fans such as myself got to show our support to vote him in and show him our love if we ever want to stand a chance to have Kawhi resign with the Raptors after this year.

I have always like Joel Embiid. He has the talent and he is a mouthful with his sense of humour. He likes to diss players in the league but he is able to back it up, which I respect alot. He can score, rebound and shoot 3’s. What’s not to like?

Again, my home town boy, Kyle Lowry, he doesn’t score as much as before not coz he couldn’t but he has given up some of his shots attempt to Kawhi and the most improved Pascal Siakam. But…Kyle is having a career year in assists per game that’s a cool stat to show his willingness to make his teammates better, and play a more team-oriented brand of basketball. Klow got my vote!

Ben, although he still have plenty of room to develop his game, should take more jumpers or 3pt shots but for him to rely so much of his scoring around the rim and still be effective? The sky is the limit for this 6’10” guard. I like his game. He deserves to be a starter.

This is a no brainer. As long as King James is in the league and as long as he is not crippled, he will be an annual all-star starter in this league. He is a total package. No need to explain any further, he is an all-start starter, especially 1st time wearing the Lakers uniform to the game.

The Unibrow is a beast every single game. From shooting 3pters to dunking and attacking the rim. This guy can do it all.

I know he is only a rookie and most likely he wont’ get enough all-star votes to be a starter, but his maturity and his natural talent is good enough to make him an all-star. His personality is well-liked and he is such a treat to watch. Imagine having him on the floor and dishing out all these crazy passes?

This is definitely a bias pick, especially guys like James Harden and others deserved to be selected as the starter. But hey, voting is based on popularity and not necessary by how well they perform this season, or else, there is no point for fans to vote. I chose Derrick Rose coz this year is like a rebirth of his MVP days. I am happy to see Derrick so appreciative of his performance on the court. His career high of 50 points at one game and he cried during the interview really moved me, he appreciates the fans and the support and knowing how hard to achieve something like this. Rose is playing more aggressive, quick 1st step and confident brand of Derrick Rose basketball. We don’t know when it’s the next time we will see Derrick stay healthy again so let’s cherish this moment and give him a chance to start in the all-star game, shall we?