For this press trip, the moment I had arrived at the Sky Harbor International Airport in Phoenix, Arizona, I immediately took an Uber to the hotel located in the city of Mesa. Checked-in to my room, dropped off my luggage, took off my winter jacket and sweater and wore just a nice tee and short pants and I immediately made my way to the Sloan Park, home of the Chicago Cubs spring training facility. The feeling of escaping from the cold winter temperature in Toronto, Canada in February and getting some much needed sunshine and hot weather was a good reward for me.

Yup! Since this press trip’s main theme is about “Spring Training“, that’s the 1st thing on our agenda and I was super excited. Mesa is a city located just east of Phoenix, in Arizona. So, the Uber ride from the airport to Mesa was just about 25 minutes, so it’s not very far.

My 1st impression of the Sloan Park? It’s modern, fresh, inviting and it gave me a feel of the iconic “Wrigley Field“, official home of the Chicago Cubs during the regular season in Chicago. Of course, Wrigley Field is historic and it was built back in the early 1900s, there is nothing that can duplicate that type of historic brick and mortar, however, I really like this Sloan Park. I was told to meet with the rest of the journalists at the 1st Base gate and so I went. As per usual, fans had to past through the medical detector and for me, it was a smooth check-in since I don’t have a backpack with me. I do suggest you check out the Chicago Cubs Sloan Park website for any specific rules for entering the MLB baseball stadiums. 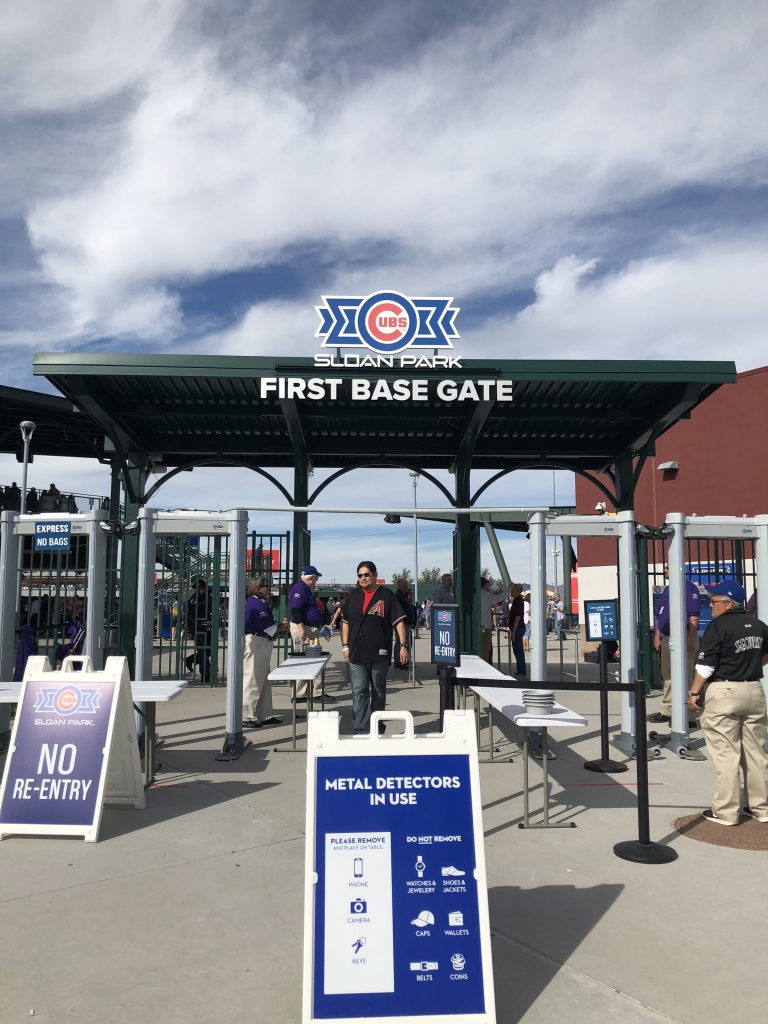 The 1st thing I saw was a nice “Spring Training Chicago Cubs” signage. It resembled the iconic sign at the Wrigley Field. I immediately had to take a photo in front of it. Our seats were located at the 1st Base area, so the view was amazing and very close to the game action.

After watching the game a bit, I decided to roam around the park, just to check out what the entire stadium looks like. Everywhere I walked, there were tons of fans wearing Cubs gear. Seems like many were big Kris Bryant or Javier Baez fans. Hotdogs and ice cold beer come hand in hand. I was told by the locals that the Chicago Cubs actually brought in famous pizza and hotdogs vendors from Chicago to set up concessions around the stadium to serve the Chicago famous deep dish pizza and footlong hotdogs.

Also check this link for some of the innovative hot dog ideas that are available at the Sloan Park. 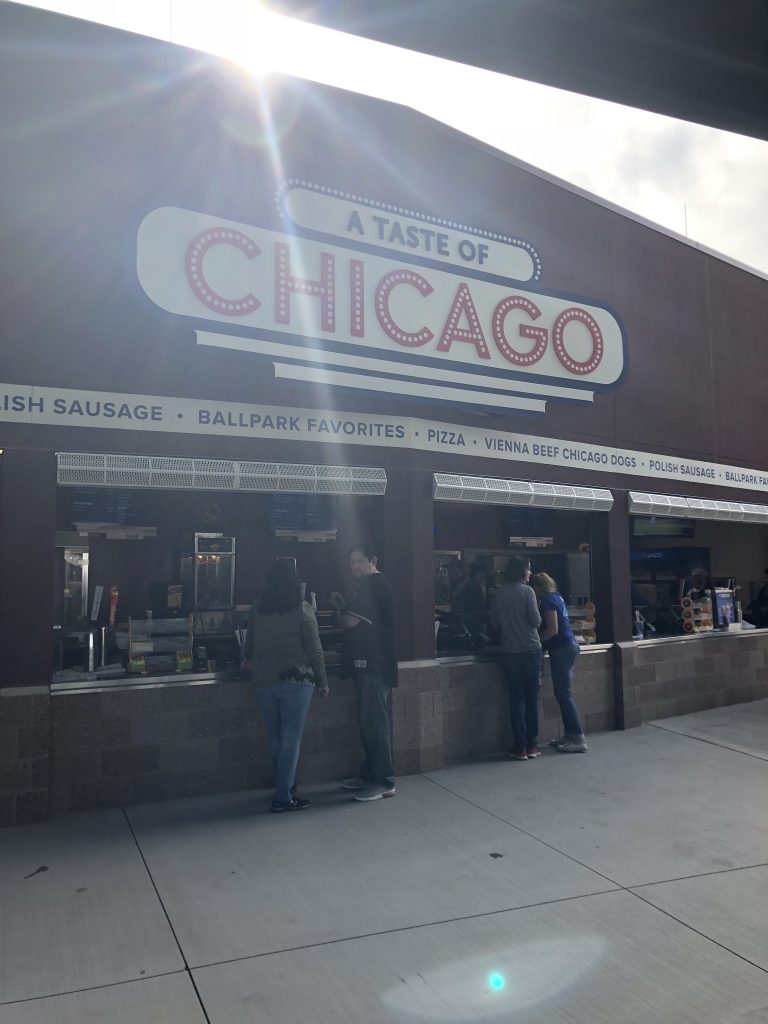 The vibe at the spring training game was just so chill and relaxing. The players were very chilled as well as many of them were glad to be back on the filed in sunny weather. They seemed to enjoy having small talk with the fans, signed autographs and took selfies with them. The fans were also very behaving, they don’t swear, but more in a fan friendly environment. Watching spring training baseball games are perfect for a guy’s night out, ladies night out, date night or family outing.

Sloan Park was built in 2014, which is one of the newest spring training ballpark in the cactus league. I did some research, apparently, most spring training ball parks were a bit older and were built in the late 1990s, 2000s, so Sloan Park is very modern and facilities are very thought out and accommodating for its fans. Quite honestly, the capacity of these ball parks are much smaller in size, which makes it more cozy and more close to the action. After walking around the entire ballpark, there was not one bad seats around the stadium. Personally, my favourite spot would be sitting out on the outfield lawn section. It’s first come first serve basis. You put a blanket on the grass, sit down and you can start a picnic. The lawn slope is perfectly align with the sight of the home plate, it’s just so relaxing. You can soak up the sun and enjoy the breeze, stretch your legs, walk around and spend a perfect warm sunny day.

MoVernie Fun Fact #1: Sloan Park, opened since 2014, home of the Chicago Cubs has the largest stadium capacity of any spring training stadium at 15,000 people. 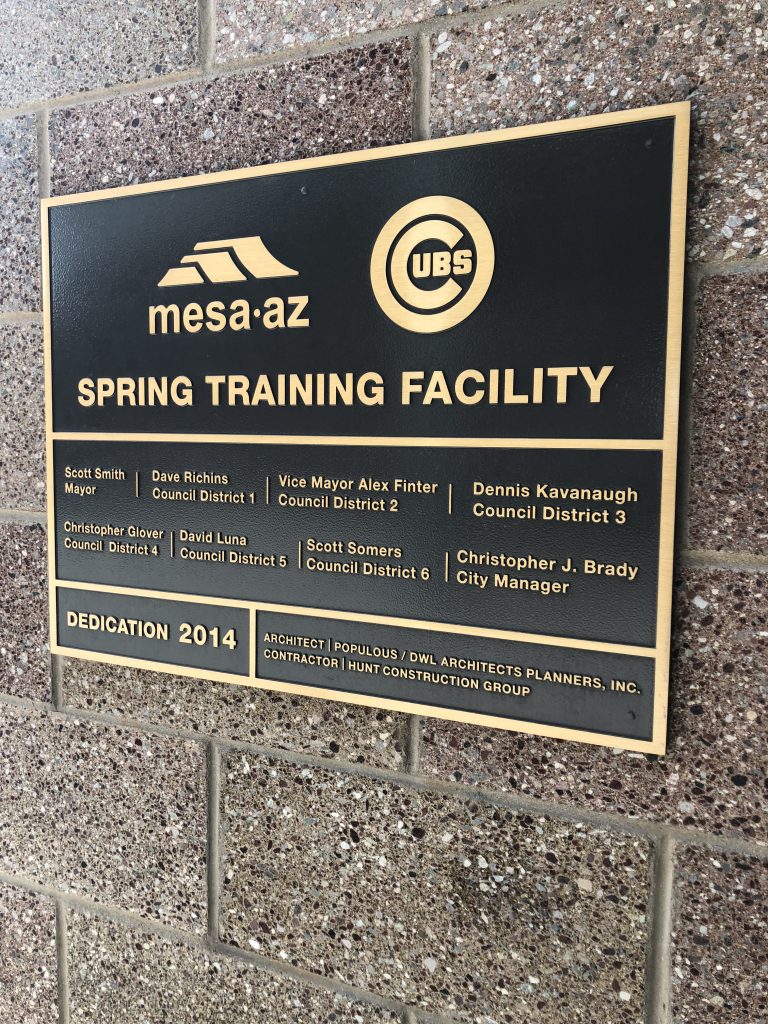 To my Canadian friends, there are many airlines that will get you to Phoenix, Arizona to watch the spring training games. In fact, Air Canada has direct flight daily from Toronto to Phoenix. If you want to get out of the cold winter temperatures and go somewhere warm, consider visiting Phoenix and its surrounding areas such as Mesa catch some spring training games, wine and dine, enjoy the nightlife, play some golf, do some shopping, perhaps go for a hot air balloon ride. I would like to thank you Visit Phoenix and Visit Mesa for having me on this spring training press trip. Not only I enjoyed baseball but also help get away from the cold winter that we experienced in Toronto, Canada. Thank you! Thank you!

MoVernie Fun Fact #2: Major League Baseball had implemented a pitch timer during 2019 Spring Training games. A 20-second pitch timer will begin in three phases during Spring Training. In the first week, pitchers and batters will get used to the 20-second pitch timer without penalty. Then the week after, umpire will give reminders to the pitchers and batters to abide and get used to the 20-second pitch clock. Later in the spring training weeks, depending on the decision by MLB, umpires maybe asked to give penalty to the ball-strikes situation penalty. But nothing is imminent as MLB is putting this as an experiment to speed up the pace of the game. 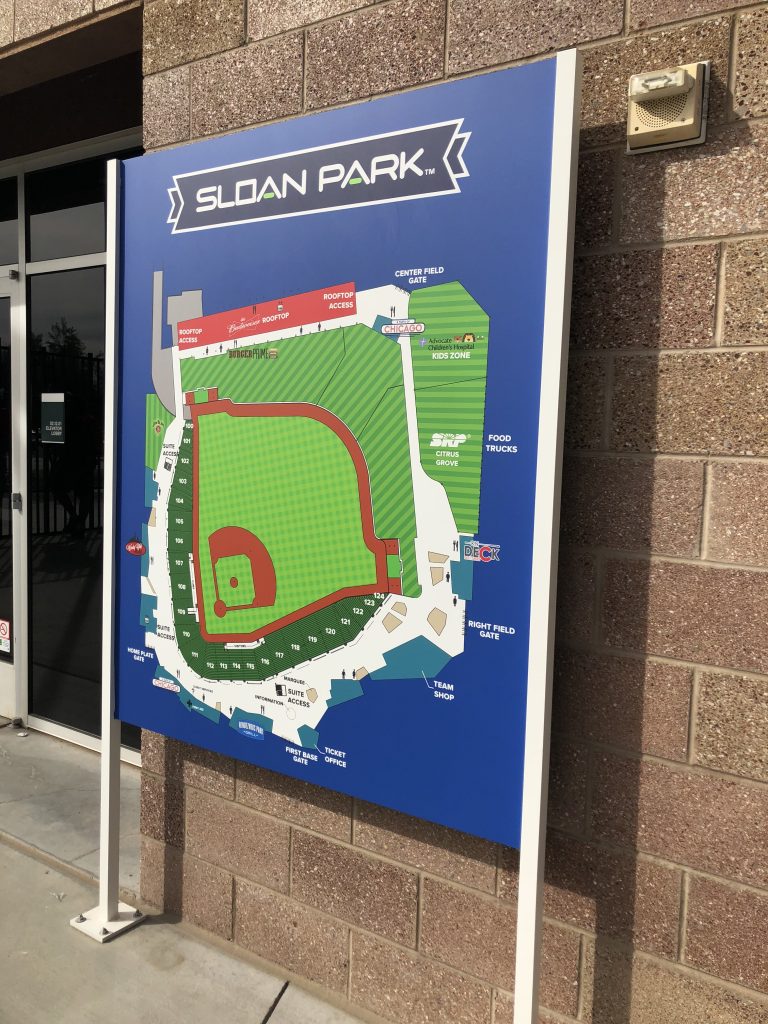 MoVernie Fun Fact #3: Did you know……for the first time since 1908, the Cubs are World Series champions? It took them 108 years to be on top of the world. It was a long drought but it’s that old saying goes, “good things are worth the wait”.

MoVernie TIPS: Below are some of the tips that I recommend when you visit the Sloan Park.

Want to know more about my press trip experience and adventures during my visit in Phoenix and Mesa in Arizona? Follow my journey on Instagram (@RealMoVernie) and Twitter (@MoVernie).

The visit to the Sloan Park and this press trip was provided by Visit Phoenix and Visit Mesa. However, as always, the opinions expressed in this post is entirely my own. 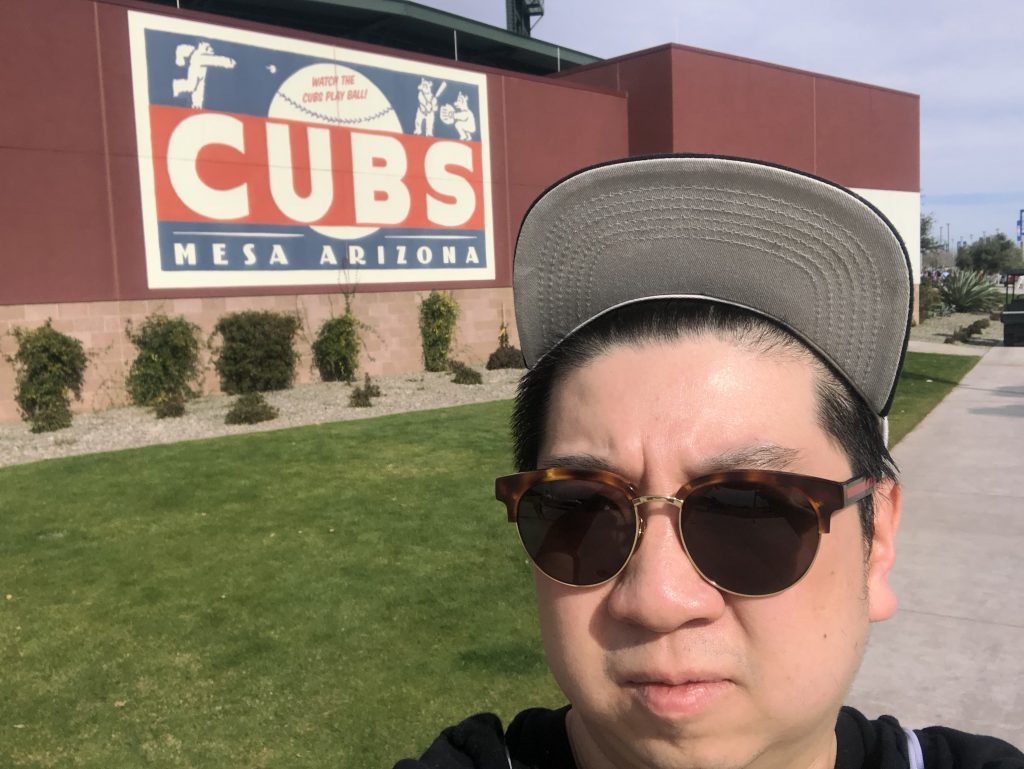 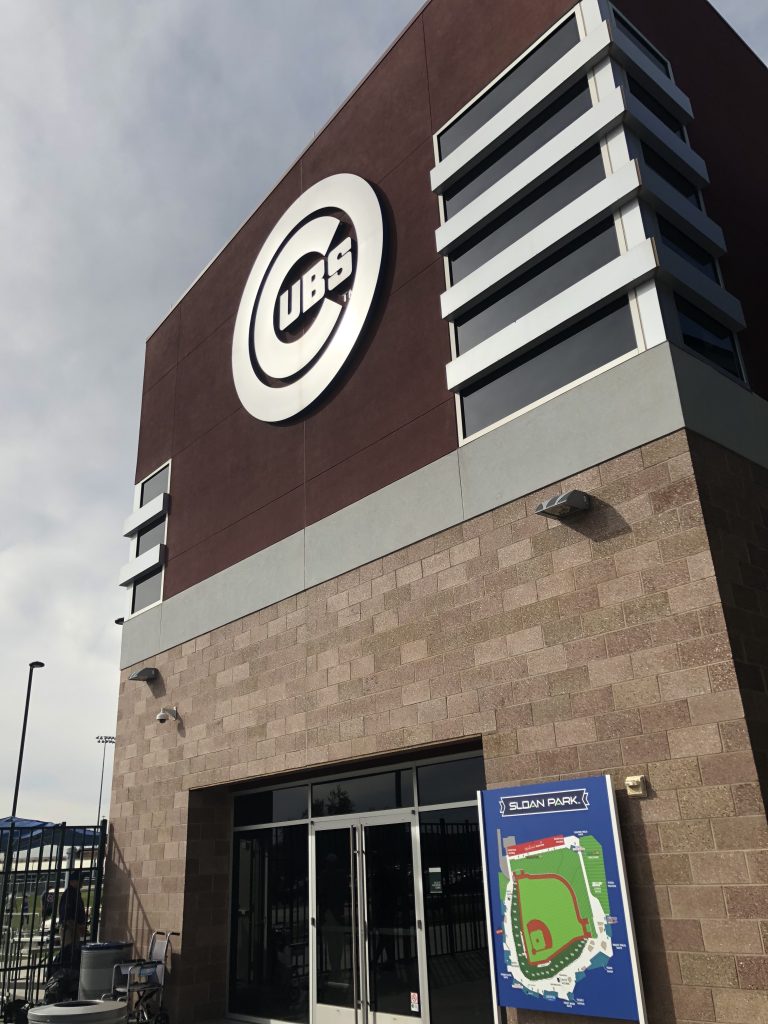 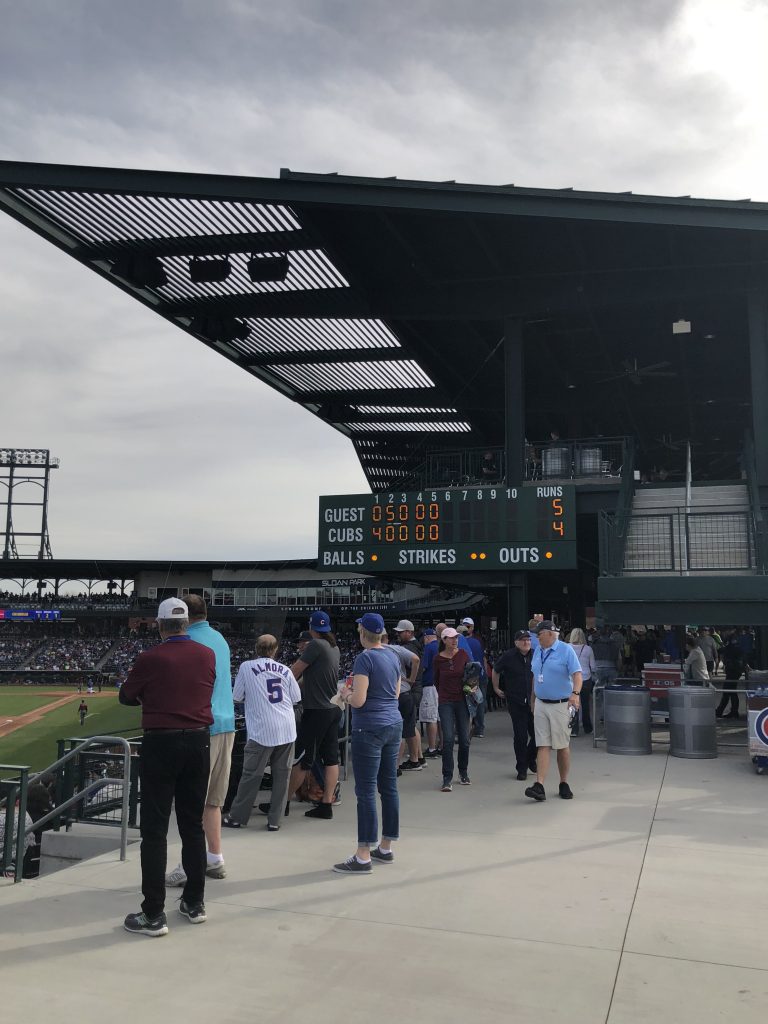 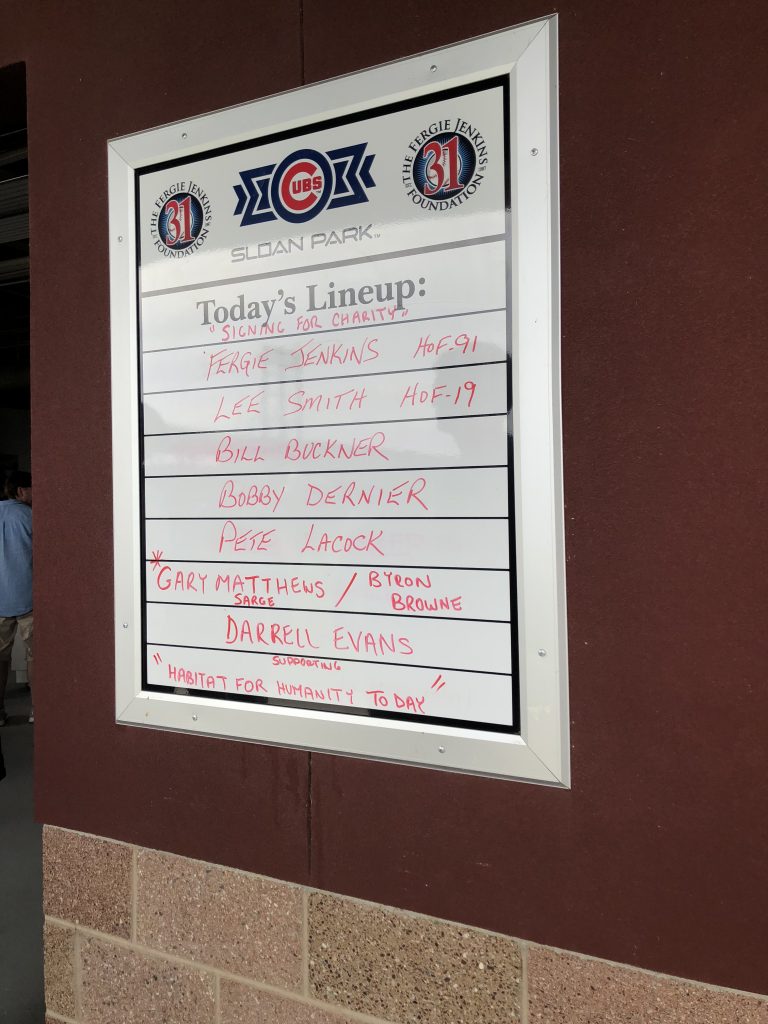