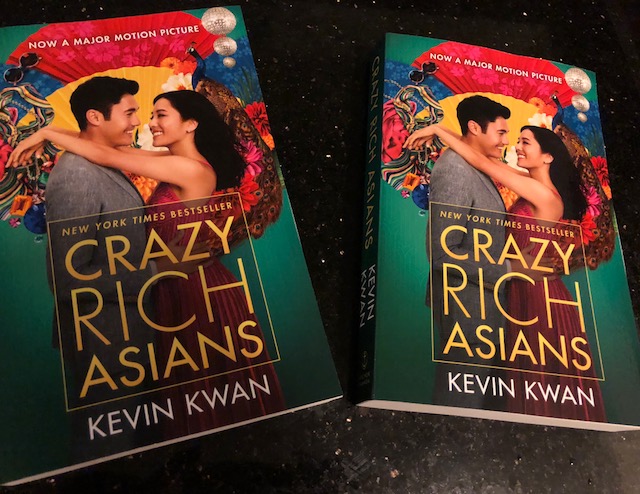 Yesterday, my guest and I got invited to the Crazy Rich Asians Private Screening that was held at the TIFF Bell Lightbox. Tons of media were on hand standing on the red carpet interviewing some of the casts that flew into Toronto to promote this film. Cast members included Ken Jeong, Awkwafina and Nico Santos. (click here to check out the cast meet & greet & media red carpet).

Meanwhile, we took the escalator up to the theatre to watch this film that made its 1st showing in Canada.

After posting this exclusive event on my MoVernie social channels, a number of my friends and followers wanted to know if this is a movie worth watching and “Is it a good movie?”. I have decided to write this BLOG so I can express my feedback and share my opinion here.

NOTE: Just to be clear, when TIFF reached out and invited me to this private screening, I have no idea what “Crazy Rich Asians” is about. I didn’t even know it was based on a best selling novel. So…this can work or against my favour, but I truly think that without reading the book may work better coz it means I am non-bias about this film. I would be able to express my views truthfully without any comparison between the novel and the film version.

So…where to begin. In this BLOG, I will try not to focus too much on the story plot or discussing the specifics of the film coz I don’t want to spoil anyone about the story line or the detail. Crazy Rich Asians is about an Asian American girl, Rachel Chu, who falls in love with her boyfriend, Nick Young, whose family happens to be one of the riches in Singapore. The family are filthy super rich. The film talks about a number of issues surrounding a number of characters in the film. This includes family values, family priorities, the different level of social class status, American/Asian culture  and all other kinds of topics. Overall, I enjoyed watching this movie, it’s funny, energetic, refreshing, emotional and touching throughout the film. The story plot is solid and super well-made.

Some of the scenes that were very memorable to me and I enjoyed very much in the Crazy Rich Asians are the following:

Overall, I highly recommended you to watch this film.For me, I just prefer a nice and simple romantic film such as Crazy Rich Asians. No CGI, no fancy gimmicks, just plain & simple real actors with real acting talent to tell the story.

On a personal level, this Crazy Rich Asians have a lot more meaning to me coz I am Asian, I was born in Hong Kong. In this Crazy Rich Asians, it’s a full Asian cast. In fact, many of the Asian Americans in this film played big important roles. They speak proper English, in fact, a few of the main characters even speak with British accent. The characters are portraying in roles that have meaningful acting skills, emotional skills and the opportunity to showcase their feelings and expressions. This is a breath of fresh air that went away from other typical Hollywood movies that only portrays Asians who speak poor English on the big screen. No more characters who only knows Kung-fu or lives in Chinatown. Us Asians are more than that, we contribute to our society, we have successful entrepreneurs, young professionals and other skills that plays a role in the communities.

It’s unfortunate that there aren’t many investors who would want to invest in more films such as Crazy Rich Asians that have a full lineup of Asian casts. We need more film like this so there are more opportunities for the talented Asian actors, directors, producers and writers. It’s equally important that more Asians are being portrayed in non-stereotypical way. TIFF Artistic Director Cameron Bailey, pointed out from last night’s private screening that, the last all Asian casting film showcased was called “The Joyluck Club“, that was dated back in 1993, almost 25 years ago!!!!! I don’t want to wait another 25+ years to see another high quality full Asian casting film.

In the near future, I would like to see more variety of films that employ Asian English speaking actors. The film doesn’t have to be 100% played by Asian actors. What about a film that talks about Asian Americans’ lives in the United States? What about interracial relationships in films? That’s what I would like to see.

To be honest though, whether this is an all-out Asian cast or not, the film itself is beautiful, touching and solidly made. I highly recommended you to buy tickets and see for yourself.

Crazy Rich Asians open to theatres near you on August 15th, 2018. Check your nearest theatre listing for show time.

Again, special thanks to TIFF for inviting us to this private screening. We were so glad that we went and watch in this film. It will do well in the boxscore opening on August 15th.