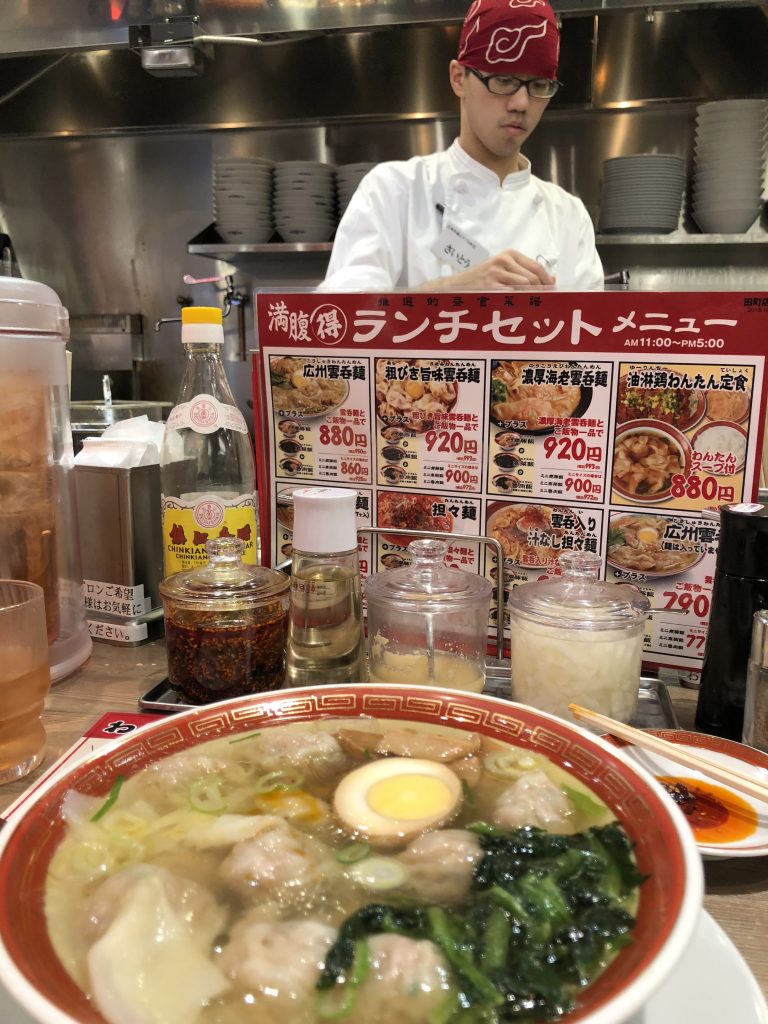 On November 15, 2018, the Guangzhou Market Musub Tamachi branch was opened near the Tamachi train station. We arrived in Tokyo at around the same time so we were technically one of the 1st person to try the Wonton ramen at this place. It’s located at the new shopping centre and just 2 minute walk from Pullman Tokyo Tamachi (Pullman Tokyo). Super convenient!

During this whole entire trip to Tokyo and Osaka, Japan, I tried to eat as many Japanese food as possible. That’s coz Japanese food in Japan are authentic, tasty and fresh. And ordering food such as Western or Chinese food are relatively more expensive as it’s relatively rare to find around the city. And I am not kidding either, I didn’t order any western food items at all during this trip coz I know when I come back to Canada, I can have as many western meals as I want.

Anyhow, I did managed to dine at a Chinese-Japanese fusion restaurant. It’s called “Kosyui Chiba (Guangzhou Market Musub). This place was opened just opened 2 weeks before my visit to Japan and it was located at the brand new Msb Shopping Centre, located right across the Pullman Tokyo Tamachi Hotel (where I stayed). The Tamachi area is growing with new shopping centres, hotels and restaurants. I actually didn’t have any intention of dining at Kosyui Chiba but as I was exploring this shopping centre, I happened to walk by and saw 2 hardworking staff hand making fresh wontons. The wontons looked fresh and I kind of wanted to try the Chinese food in Japan, just once, to see how they tasted.

This restaurant apparently have a few other locations around Tokyo, so this Tamachi restaurant is the latest location for the brand. The space was spacious, you can choose a few tables located outside the restaurant. It’s kind of like a pseudo patio but inside the shopping centre, overlooking the shoppers. Then, there were tables inside the restaurant. Since I was on my own, I chose a counter spot facing the chefs. Most often, I love sitting at the counter so I can see all the happenings in the kitchen area and observe chef’s daily routine.

As I looked at the menu, there were tons of choices, even just wontons alone, there were many variety. Apparently, this restaurant serves up wontons with ramen noodles, which is different from our traditional Chinese thin egg noodles. But since I am restaurant hopping, I can’t intake a bowl of noodles, so I opted to order pork wontons in soup only. I noticed there was an interesting combo on the menu. Apparently, they offered you a bowl of wonton soup ramen plus a bowl of pork rice. I was a bit puzzled coz both ramen and rice are heavy carbs, I just didn’t know how a person could manage to finish all of the rice and noodles. Anyway, perhaps the Japanese likes to eat like that. I am always open minded with how chefs be creativity or add a twist to the traditional food.

The best part of dining here? They offered cold tea in a pitcher, so I could drink as much as I want coz I am always thirsty. LOL In front of me, there were a bunch of sauces, from red vinegar to chilli sauce and other goodies. 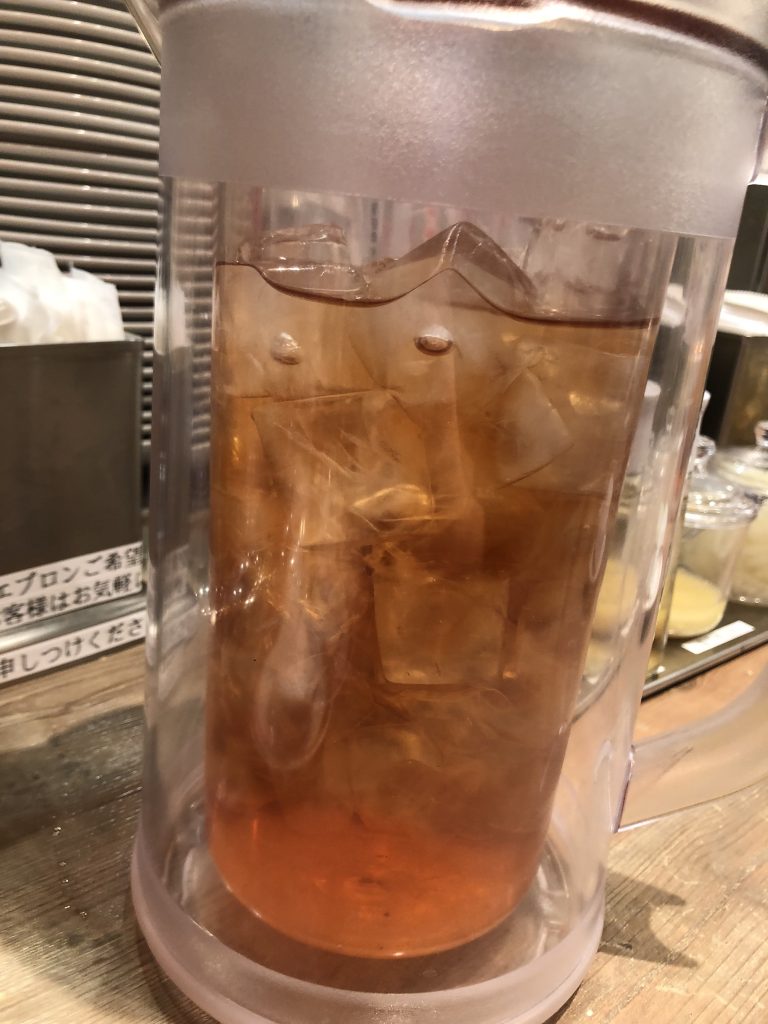 One interesting utensil that I saw was a big ceramic deep spoon. I don’t always see this type of spoon at the Chinese restaurants that I visited in Hong Kong or in North America. Most of the time, we are offered with the usual traditional Chinese spoon for drinking the Chinese soup. But for this wonton purposes, the deep spoon works amazingly, the depth of the spoon holds the wonton perfectly and allowing me to add sauce to each wonton. It’s actually very functional. 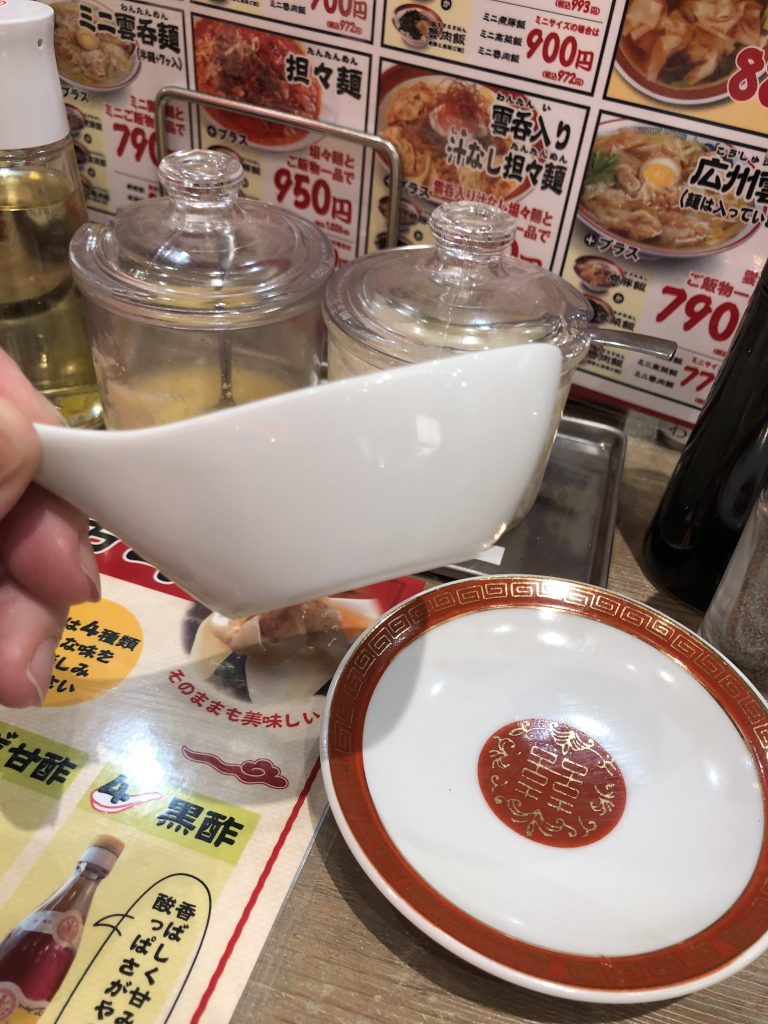 Anyhow, it was my ONLY Chinese meal I had in Japan and the main reason was that I wanted to check out the restaurant located across Pullman Tokyo Tamachi, the hotel that I stayed, so to check out the scene per say, but the moment I walked by and saw the staff making fresh wontons on the spot? I just couldn’t resist.

I highly recommend you to try this restaurant, especially if you are in the Tamachi area or staying at the Pullman Tokyo Tamachi. 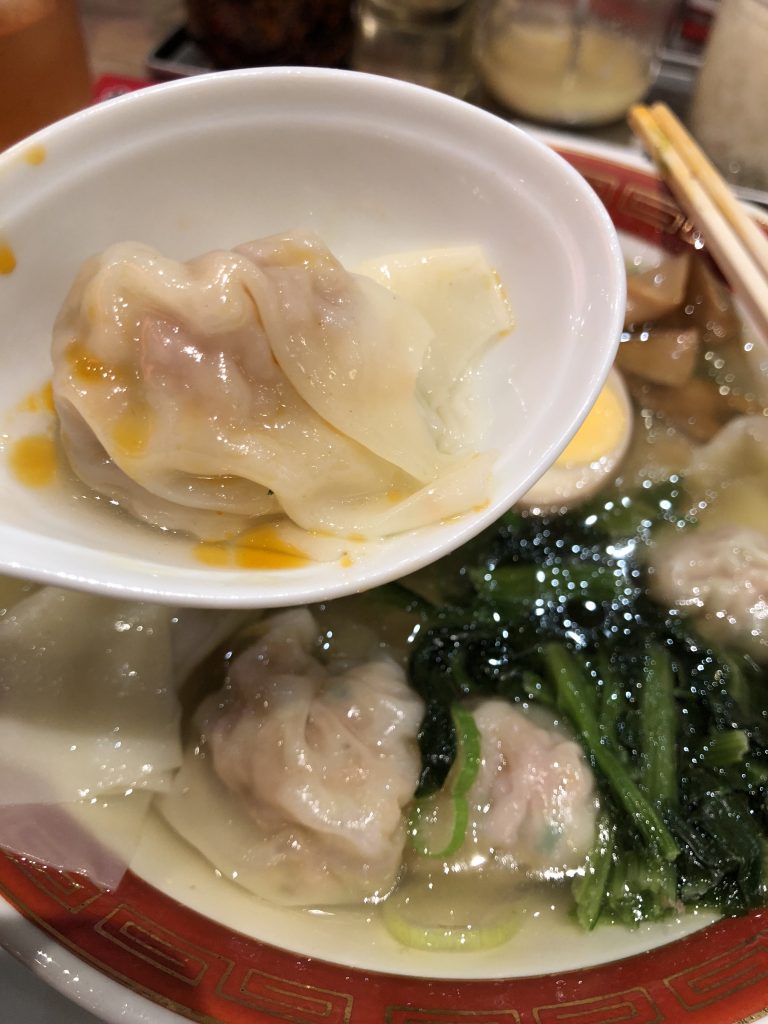 MoVernie Ways of Eating A Bowl of Wonton Soup

That’s how I like to it my wonton. The MoVernie Way! What’s your way of eating your wonton? What’s your flavour? Let me know, I am interested to know.

Based on my dining experience at Guangzhou Market Musubu Tamachi, here are my own opinions and observations on the differences between Chinese wontons and Japanese wontons. 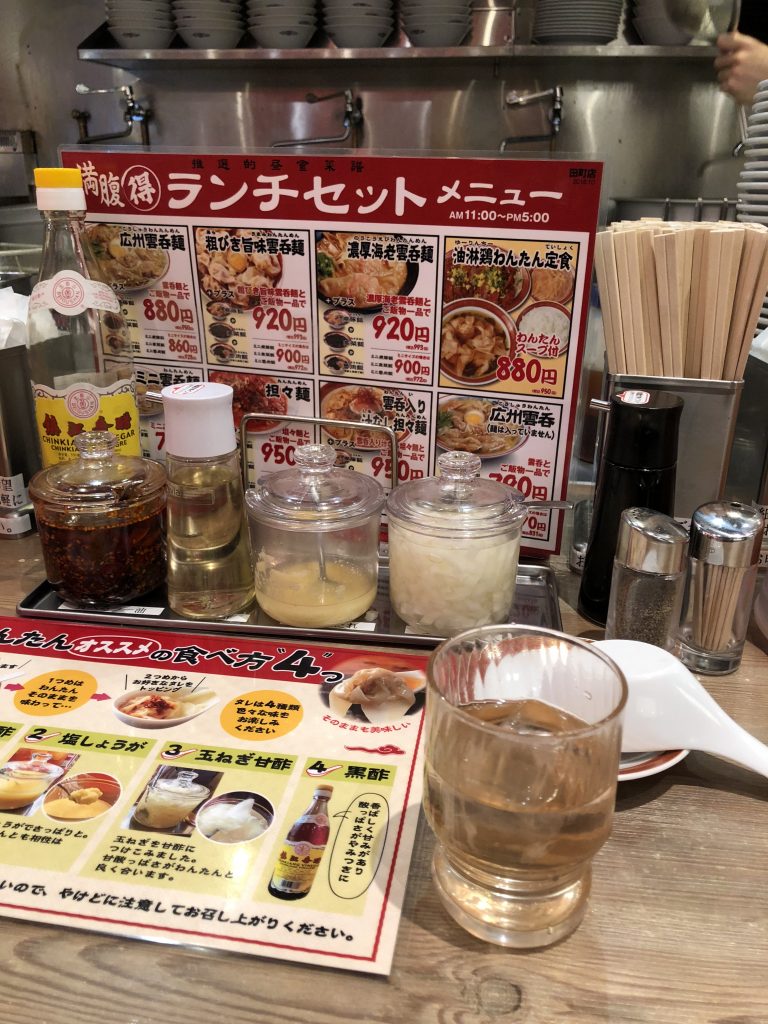 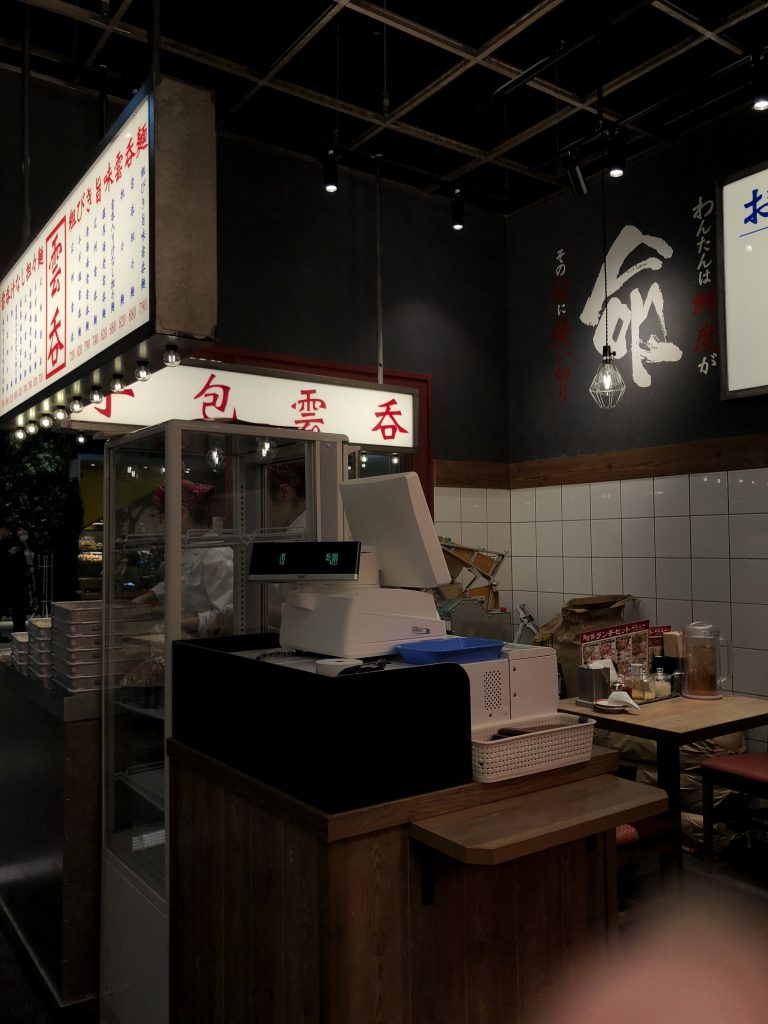