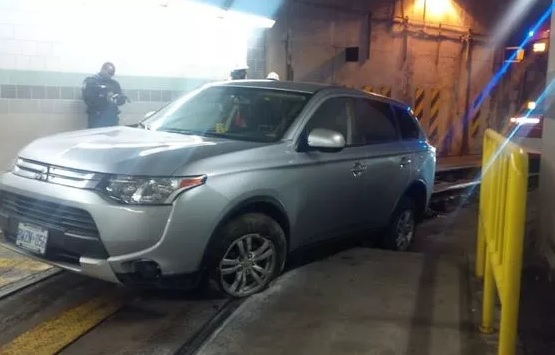 This morning, as I drove pass the Queen’s Quay Street Car Terminal, I noticed that there were a number of heavy duty trucks blocking the entrance. Then I realized no street cars were coming out from the terminal either. I told myself, “That’s odd! Why would the TTC doing construction or maintenance on a weekday morning, especially I don’t hear any TTC notice”.

Now, everything makes total sense and a #SMH moment to be exact. The reason why the street car terminal was closed this morning was because a man followed the GPS and literally drove his Mitsubishi Outlander from the entrance, passed the Island Ferry Docks station and all the way to the turn circle tunnel at the Union Station before the SUV could no longer move as the raised tracks just too high even for a SUV to move any further.

This happened this morning at around 4:00 a.m. TTC officials said the man flee the scene at one point (quite possibly asked for help) and then returned back to the SUV. However, the whole Streetcar 509 and 510 routes came to a halt. Tow truck aren’t able to access in there without getting stuck either. So, TTC has to use heavy special duty equipment to toll this SUV out of the tunnel, that took quite a number of good few hours.

The man was slapped with a fine of $425 for illegal entry. Now, my MoVernie curious question would be….”does he have to pay for the heavy duty equipment needed to remove the SUV”?

Lessons Learned: Peeps! GPS is usually great but at the end of the day, you still have to use your common sense. Use your judgement & observe your surroundings. Don’t be lazy and rely on technology. This man took the “You jump, I jump. You fall off the cliff, I fall off the cliff too seriously”. Don’t do that. I just hope he is not suiting the GPS company coz it’s not the GPS fault.

Here are some photos taken by the good Twitter Peeps:

This is the entrance of the Queen’s Quay Street Car Terminal. (Photo Credit: Twitter Photo) 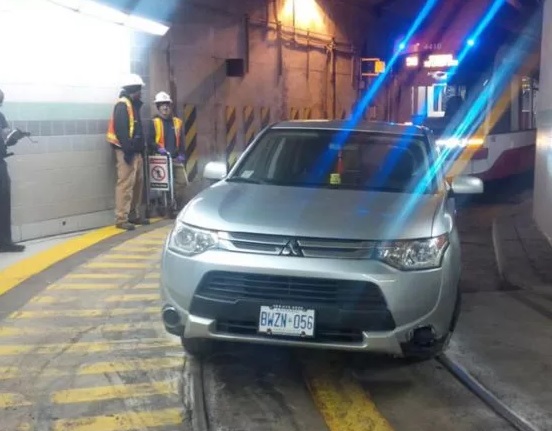 SUV came to a halt near the turn circle of the Union Station Streetcar Terminal. (Photo Credit: Twitter Photo) 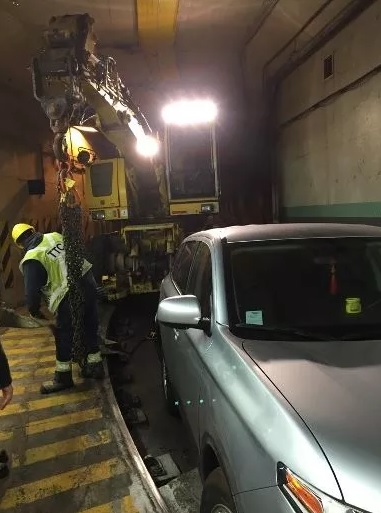 Heavy duty equipment were needed to remove this SUV out of the streetcar tunnel. (Photo Credit: @BradTTC)