So….last night I posted a selfie of me with the Canadian Super Star, Shawn Mendes on my social media platforms (Instagram, Twitter, Facebook, TikTok) and everyone went crazy! So many likes, comments and me getting new followers. I also get many DMs asking me where I saw Shawn, which airport, which flight, honestly, this is insane and I am not even a super star. I can’t imagine how much stress or chaos these celebrities have to deal with on a daily basis.

For the record, I ignored all of the DMs as I want to respect Shawn.

I honestly didn’t expect my posts to go viral mainly coz I am used to seeing celebs and superstars throughout my life. But it’s fun to see how insane and crazy die-hard fans can be when they follow their favourite celebrities.

Anyhow, I just wanted to write down some key points for the Shawn Mendes fans who cares about my encounter with Shawn.

We all know that Shawn has recently announced that he is cancelling his tour coz he wants to focus on his mental wellness. Many people may not understand but going on a tour takes a massive toll on the body and mind of the performer. They have to be in top form every single night, they have to maintain the health of their vocals, they have to travel with flight delays and etc. So much going on that I understand and respect why Shawn wanted to rest up and be more mentally prepared before moving forward with his tour.

Anyhow, back to my encounter with Shawn Mendes. Quite honestly, I didn’t even expect to see celebrity on my flight as my flight is an economy plane that possibly only carry about 80 to 100 passengers max. And I wouldn’t think any superstars would be flying on an economy flight, so it didn’t trigger my radar that Shawn was there.

Shawn didn’t caught my attention for a good half hour at the gate coz he was so low key, no diva, he was just like any other young person waiting to board the plane. I honestly didn’t even think he was Shawn as he could look like anyone. 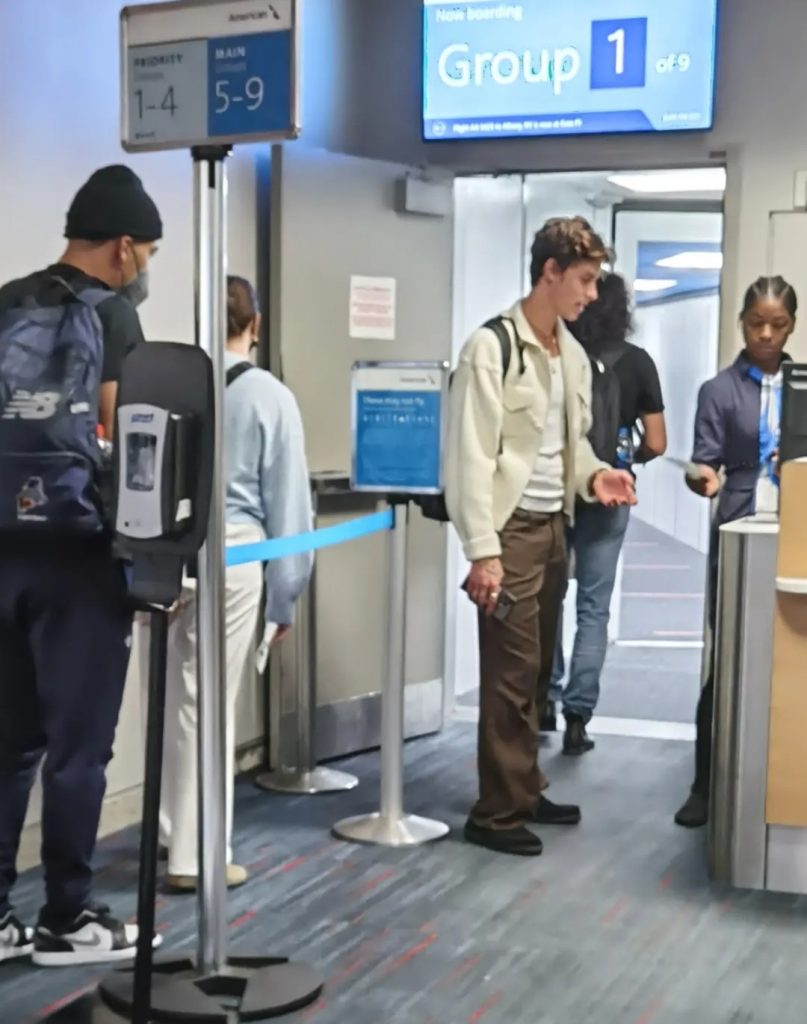 He was accompanied with his dad and mom and a few friends. One of the crew must be a guitarist as he was carrying a guitar box with him as a carry on. They were just standing around and chat quietly, they were having joyful conversations, very low key.

I was struggling to identify whether it’s Shawn or not coz he seems somewhat look a bit different. And here is my thought process, if he was Shawn, I am sure there would be many people who recognize him and will ask for a selfie by now, but there isn’t any. That’s so odd! You know that moment when you don’t want to mistakenly asking for autographs or selfie with someone who is just another normal young kid. That would be embarrassing if I identify the wrong person!

So….how do I know it’s Shawn? When I recognized his tattoo on his right hand. That’s it! The tattoo gave it away! I slowly approach him and said “Hey Shawn!”. He immediately turned his head over to me and he smiled.

We chatted a bit and it was a very calm, relax and casual. I told Shawn to enjoy life and to take care of his mental wellness and don’t worry about cancelling his tours.

PS – I know some fans commented on my selfie saying Shawn looked sad and have no soul. Listen, it was a late night flight and there were delays after delays, not just superstars, every passenger is tired. So, he was just simply tired but he is in good positive mood. Nothing to worry about!

I asked him, with permission, with his consent to take a selfie with him. He nodded, then he bowed down his head, whip up his hair and lift up his head and took this selfie pic with me. In case you wonder if he is a nice guy or not, he is definitely a nice guy. I admire the fact that he doesn’t act like he is a big shot or superstar, instead, he acted like a typical young kid going on a vacation with his family and friends.

Another interesting moment was….when we landed at the Toronto International Airport, he and his family lined up like the rest of us peasants, lining up to get to a kiosk to fill out the custom border form. But after lining up for like 7 minutes, Shawn decided to ask the staff with something. Then he came back and told his crew to follow him.

He said, “Follow me! We have access to somewhere else to get through the custom”. His dad responded, “Even me, us?”.

I think Shawn is used to the public relations or his handlers to take care of getting through the custom for him in the past or flying via private jet. It was super sweet to see him taking care of his parents and treating his crew with respect. Just imagine for a sec that a superstar was lining up the regular peasant line and he later realized he has access somewhere else, possibly for VIPs. LOL

This was not the first time that I met Shawn. I saw him at the MMVA in Toronto a few years back before the pandemic.

Anyhow, there you have it. I just wanted to write this MoVernie BLOG to share my encounter with Shawn but at the end of the day, it’s important we give these celebrities their space and freedom. Obviously, I did approach Shawn but I approached it the right way, have a small talk, asked him how he is doing, politely asked for a selfie and then gave him and his family space.

MoVernie Recommendations: When asking for a selfie with a celebrity, you need to be confident, look them in the eye with confidence, giving them vibes that you are a normal person who doesn’t do any harm and not acting like a creep or stalking them. You need to make them feel comfy around you. If they said no, respect their decisions and move on.

Anyhow, I wish Shawn all the best with his career and take his time to take care of his mental wellness.