Zirkova is an Ultra Premium Vodka and is dear to my heart as Zirkova, a Canadian-Ukrainian brands launches various campaigns to give proceeds and support back to Ukraine, which is being invaded by Russia as we speak. Plus I support its marketing strategies to encourage each individual to “Be yourself! Mixed with others!”

Available at LCBO, Zirkova has Zirkova One (black label), Zirkova Together (red label) and the limited edition of the Zirkova Together x Everything Delish (pink label). In addition to these 3 products, they have now introduced “Zirkova Unity” and also available at LCBO. I luv the name as it has great meaning to it. We should all live in unity and harmony!

I was so delighted to receive this latest Zirkova Unity vodka at my doorstep and I am excited to show you the Unbox photos below. Have a look! I luv the design, it has the yellow & blue colour that resembles the Ukrainian flag colours. Moreover, they have collaborated with an artist named Nick Sweetman to come up with a number of art work to insert inside the Zirkova Unity bottle with a different artwork design. In my case, I got the artwork #4. 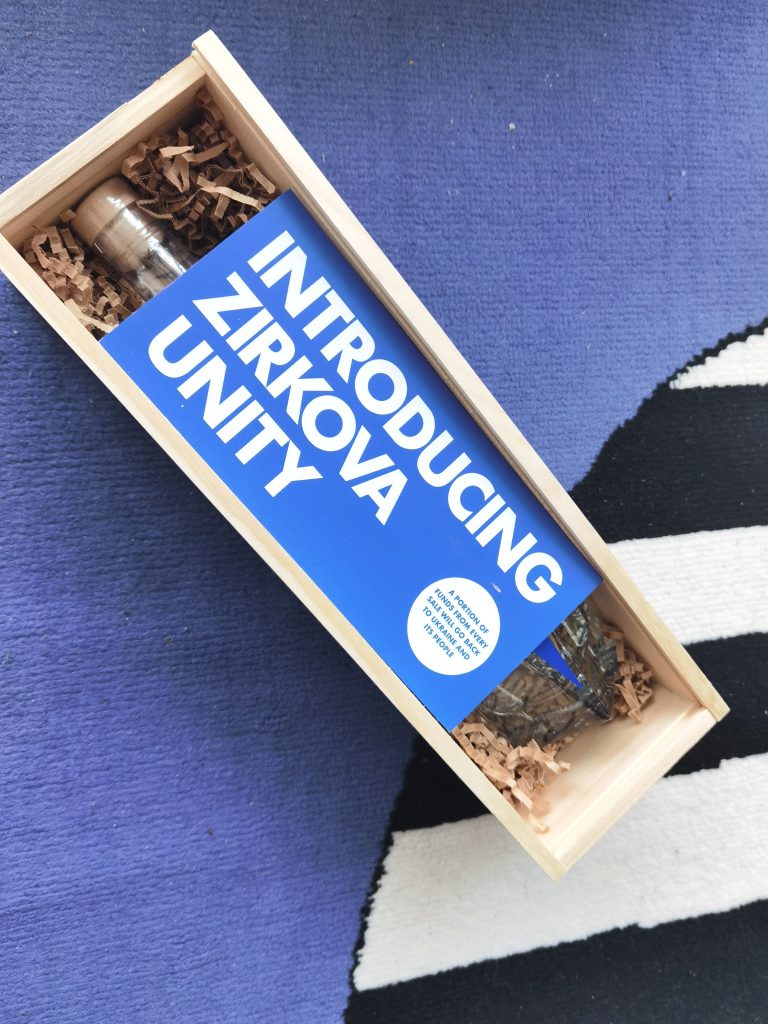 The gift box was made with a nicely crafted wooden box, I luv the aroma of the box, it has a nice scent to it. As I slid out the lid, I could see a blue card indicating, “A portion of funds from every sale will go back to Ukraine and its people“.

It also came with some cool Zirkova stickers.

From the back of the Zirkova Unity label, it says, “Zirkova Unity Vodka is proudly made in Canada, as a response to the invasion of Ukraine. Our Ukrainian Master Distiller embodies the profound craft of Ukrainian Vodka making an art and science from the birthplace of vodka itself. Handcrafted with Canada’s best wheat from the heart of the Prairies, our grain spirits are blended with natural artesian water sourced deep within the Canadian Shield. Zirkova Unity is a loving expression, smooth and approachable. With every bottle sold, a donation will be made to funds supporting Ukraine and its people.” 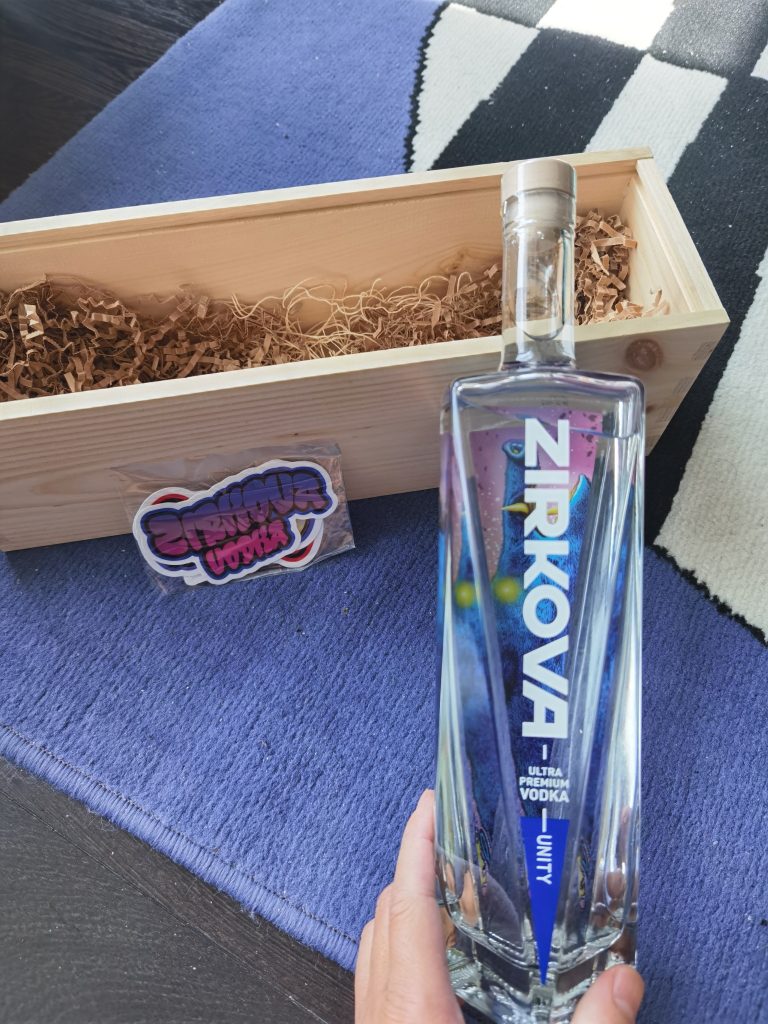 This artwork by Nick Sweetman is titled “Big Tusks”. “Boars are hardy, adaptable, and fearless. They thrive in a variety of habitats all over the world, and are one of the most widespread mammals on the planet. This furious blue boar with yellow tusks is a survvivor – a symbol of Ukrainian resilience in the face of adversity.” 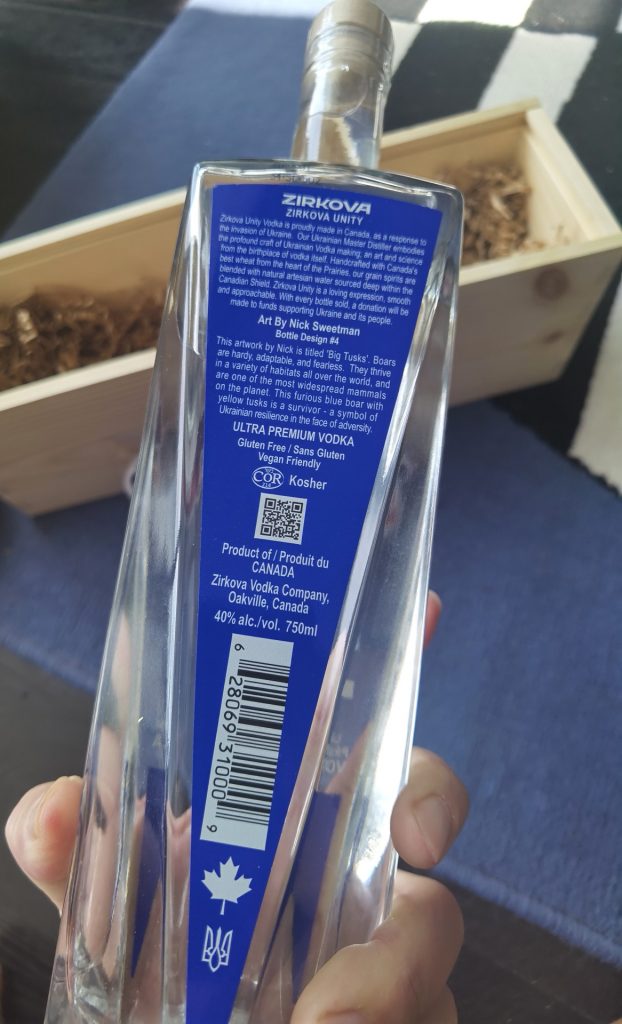 Zirkova Unity was gifted to me by Zirkova Ultra Premium Vodka but opinion is my own. 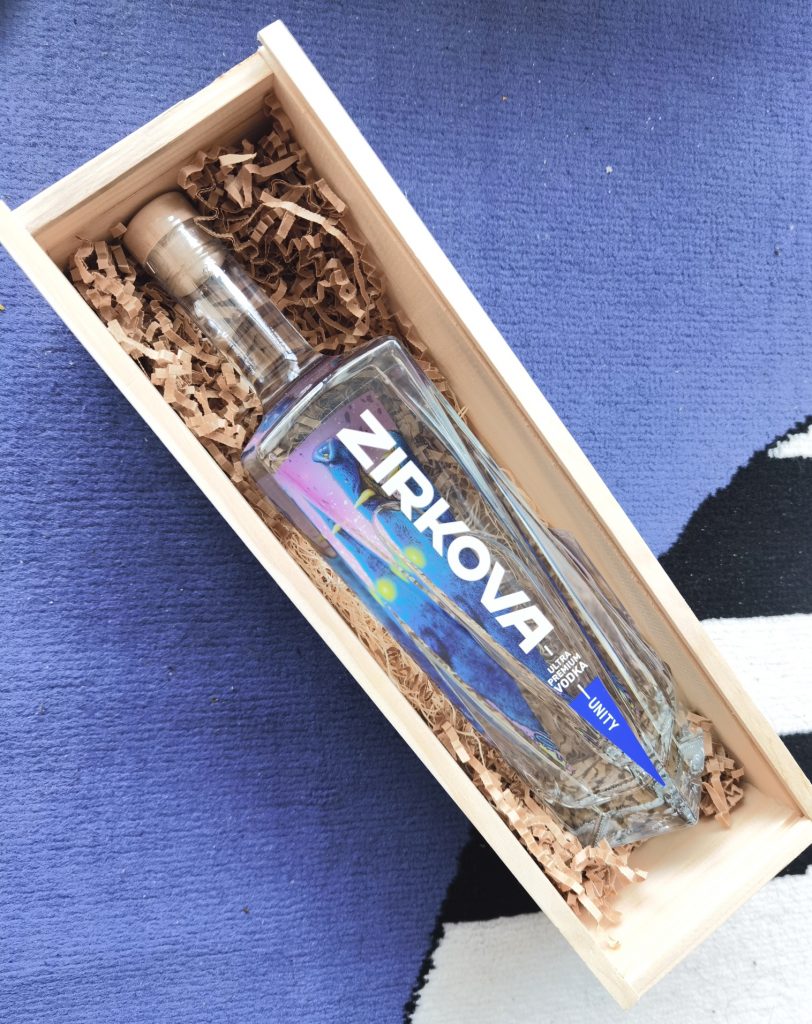